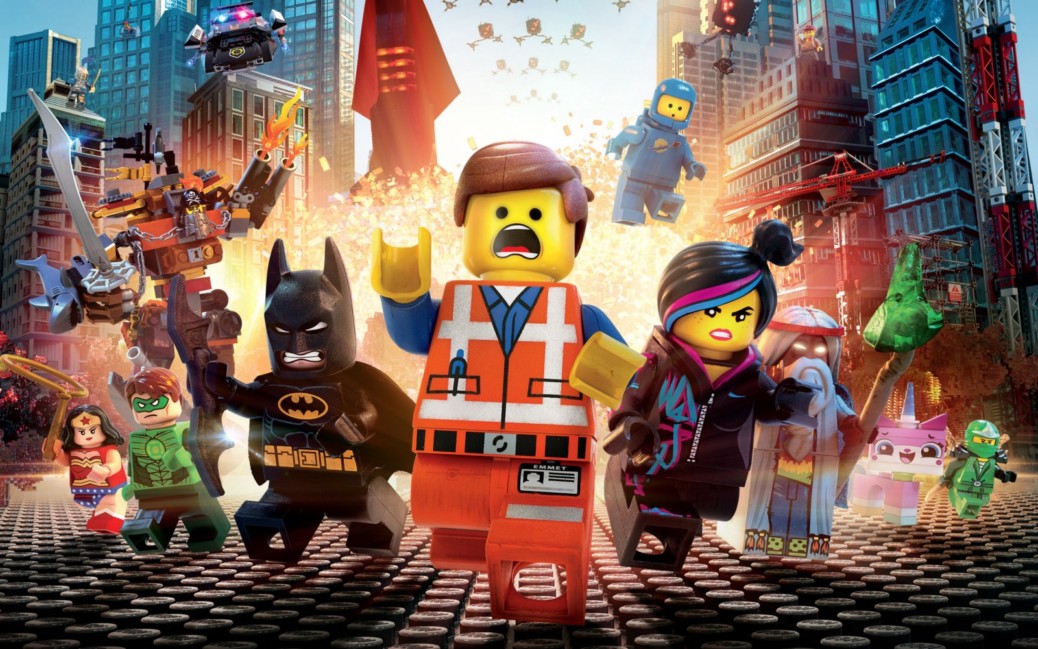 The musical theme of “The Lego Movie” is a psychotic pop song called “Everything is Awesome.” Its synthetic beat thumps like a plastic tell-tale heart, its vocals are robotic and auto-tuned. It’s so catchy, it worms its way into your grey matter, nests, and reproduces like a parasite.

With that song hammering away relentlessly, it’s easy to see how the movie’s Lego land has become a dystopia of thoughtless conformists consuming overpriced coffee and watching an “Idiocracy”-style TV sitcom called “Where’s My Pants?” Everything is not so awesome, you see, and one average Lego man – who, like every other average Lego man, has a yellow head and two black dots for eyes – destined to change the world.

Writers/directors Phil Lord and Christopher Miller have built an amazing cinematic world out of Legos, or at least photo-realistic computer-animated facsimiles of Legos. It’s clever in concept, if a bit manic in execution. Every shot is an eyeful, sometimes to a fault. For every wonderful image – massive and surreal Lego-brick ocean waves, for example – there’s an action sequence so manic, it’s nearly incomprehensible. Sight gags, pop-culture references and inside jokes zing by lickety-split, a problem with Lord and Miller’s first feature, “Cloudy with a Chance of Meatballs.” One can’t help but wonder if these movies are hyper-edited per a mandate by studio accountants, so we pay to see them a second time in order to catch all the jokes.

But Lord and Miller’s world is made of witty ideas as much as CG bricks, something we wouldn’t expect from an oversized commercial for one of Earth’s most popular toys. “The Lego Movie” seems to be aware that it’s a piece of corporate-branding propaganda, and plays into that idea. The hero, Emmet Brickowski (voice of Chris Pratt), is an average-joe construction worker. He’s brainwashed by the fascist regime led by President Business (Will Ferrell), who seems reasonably benevolent, but secretly doubles as Lord Business, a maniacal supervillain. In his employ is Bad Cop/Good Cop, a two-faced fellow who spins his little plastic, bipolar head around to switch personalities, and is voiced with amusing gusto by Liam Neeson.

The regime dictates that everything be built via instruction manuals. Anything not built to spec is blown up. Emmet stumbles upon the Piece of Resistance, a legendary artifact that could bring about great change. He meets up with a secret rebellious movement led by hoodied ninja-lady Wyldstyle (Elizabeth Banks), old hippie-guru Vitruvius (Morgan Freeman) and Batman (Will Arnett), who, in this incarnation, is a hilariously egomaniacal jerk. Many Lego franchise licensees turn up for funny bits – I won’t spoil any surprises, although they’re fairly well-known – although notably absent are Marvel Comics characters, perhaps one more shot fired in the eternal Marvel-DC Comic Book Wars.

Although a familiar and basic Chosen One plot is the foundation of “The Lego Movie,” it explores unexpected existential and metaphorical avenues come the third act. (Who is the god constructing this Lego world?) The film’s message encourages imagination and creativity during playtime, which is the core philosophy of Lego toys. Of course, all those licensed-franchise Lego toys have all kinds of specific pieces – that work with, say, the Batmobile only – that don’t necessarily work with building new, crazy, individualistic toys, but never mind. The movie doesn’t always follow the blueprint of mainstream family entertainment. It’s weirdly deep, consistently funny and broadly appealing.